EIGHT IN A ROW AS STOCKTON JUST PIP ASPATRIA 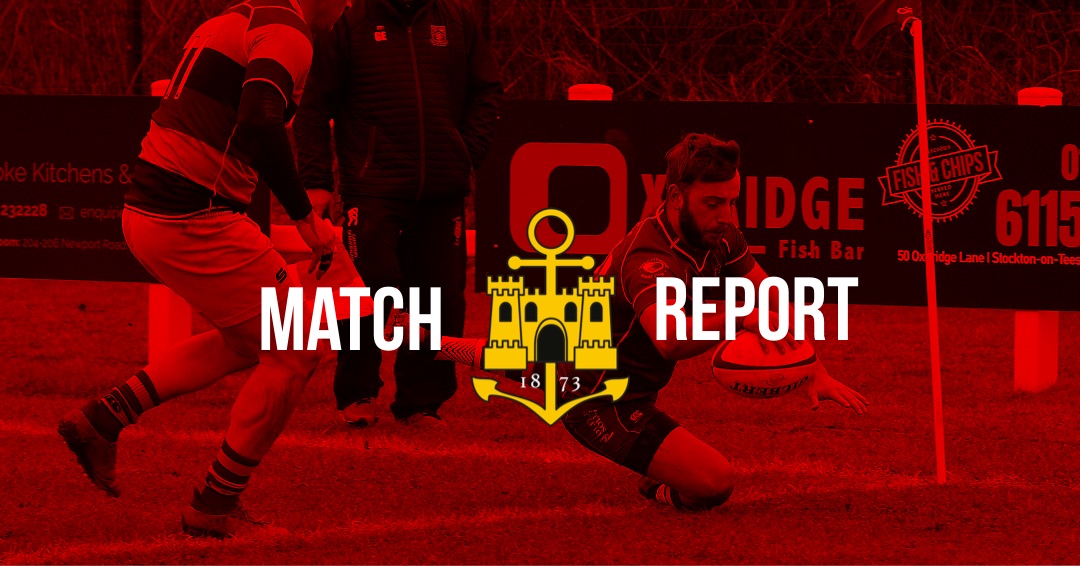 Stockton welcomed Aspatria to Grangefield for the first time on an afternoon when the Gale force wind was always going to play a part in what was expected to be a close and competitive game. Both teams came into the game on a good runs of wins, Stockton being unbeaten in 7 games and the visitors in 6, so both sides were confident of a win.

Stockton were playing into the Gale in the first half and started well, keeping the ball in the visitors half for the first ten minutes and coming close to a score on several occasions, before Aspatria managed to secure the ball and made their way impressively up the field to score a converted try after 14 minutes of the half.

Just three minutes later they were on the scoreboard again with a second try to the right of the posts. The conversion wasn’t difficult, but the kicker elected to take a drop kick in the difficult conditions and missed, a real let off for a Stockton. At this point the score was Stockton 0, Aspatria 12.

The visitors were now in control and a lot depended of which team would score next. A try now for Aspatria and Stockton would be in trouble, but on 26 minutes, following good approach work from the Pack, centre Jonny Horner made a break from 35 metres out from the try line and outpaced the defence for an unconverted try in the right hand corner and Stockton were back in the game at 5-12.

31 minutes into the half and things got even better for the home side as the forwards worked the ball forward with a succession of rucks and mauls, before second row Dan Kidd forced his way over the try line for another converted try. Stockton 10, Aspatria 12.

Despite near misses from both sides, the teams went to halftime with this score, and Aspatria started the second half as the more dominant side, starving Stockton of the ball, but being unable to make significant ground due to some heroic Stockton defence.

After 65 minutes Stockton missed a penalty kick from 35 metres, pushing it just wide, but the were now starting to get some more ball and on 72 minutes they took the lead with a 22 metre penalty from Jonny Horner to take the lead for the first time, Stephen Jones having been taken off the field earlier with what looked like a serious arm injury.

Suddenly Stockton were dominating and after 75 minutes, with the aid of a penalty, they worked the ball up the field via the pack, covering 60 metres, before hard grafting replacement hooker Sean Wallace was driven over the try line. Jonny Horner converted, and with just on two minutes of the game left, Stockton were in full control at Aspatria 12, Stockton 20.

Aspatria weren’t done yet, and with the last move of the game they scored and unconverted game to take the final score to Stockton 20, Aspatria 17, and an eighth win in a row for the home side, following what was a highly competitive and entertaining game and a good advert for D and N Rugby.

Man of the Match, as chosen by the Aspatria players and coaching staff, was Stockton Captain Charlie Doherty, for a generally good all round game.

Next week it’s another home game, a re-arranged match versus Sunderland, Saturday 5 Feb , with a 2.00pm kick off. John Coates.